Note: Hi, friends! Just a a quick reminder – some of the links on this site are affiliate links, and so I may earn a little cash on qualifying orders. It doesn’t cost you anything extra, and is a nice way to help support this site! I also want to point out that I don’t promote products I haven’t actually tried or products that I don’t trust. 🙂

These vegan keto bagels have been one of my absolute favorite recipes since coming up with them almost a year ago! Since that time, I’ve made changes and adaptations to the base recipe to improve it. Low carb vegan bagels were once just a fantasy, and so I was completely smitten with the original recipe. Of course, making these so often, I’ve discovered new tips and tricks to make these even better. So, this recipe just keeps evolving. Thank you to everyone who has helped shape these into something that is a pretty much perfect keto bagel that just so happens to be egg-free and dairy-free as well!

It’s pretty universally understood on low carb diets that you will really miss bread, and that there really won’t be a satisfying replacement for most bread-based items that you truly love. Instead, you have to sort of compartmentalize the experience of your former favorites, figure out what it is about them that you really like, and try to recreate that aspect of the food in a low carb manner. Lately, I’ve been craving bagels, or more specifically, the crunch of a nice toasted bagel with some sort of cream cheese or butter melting on top. I would take this over a doughnut any day. But, as it stands now, I haven’t been able to find any low carb or keto vegan bagel substitute on the market (let me know in the comments if you’ve found one!), so I had to try and devise my own.

After some trial and error (see the notes below), I finally came up with a vegan keto bagel thin that can be toasted and topped and tastes delicious. I’m pretty darn excited about this recipe, mostly because it clocks in at 1.2g of net carbs per serving. 1.2g. So, you can basically eat the whole batch and be fine, though I would strongly caution against that, given the amount of fiber present… These keto bagel thins are gluten free, paleo, nut free and vegan, so unless you are allergic to sesame seeds (like my brother), you can enjoy these freely!

These vegan keto bagels are a low carb, gluten-free, egg-free, nut free and dairy-free way to enjoy breakfast. They toast up nicely, and hold toppings quite well!

This site uses Akismet to reduce spam. Learn how your comment data is processed. 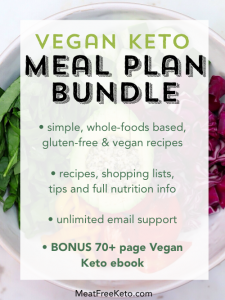 Searching is in progress

Affiliate Note: Hi, friends! Just a a quick reminder – some of the links on this site are affiliate links, and so I may earn a little cash on qualifying orders. It doesn’t cost you anything extra, and is a nice way to help support this site! I also want to point out that I don’t promote products I haven’t actually tried or products that I don’t trust. 🙂

Affiliate Disclaimer:  As an Amazon Associate I earn from qualifying purchases. Meat Free Keto is a participant in the Amazon Services LLC Associates Program, an affiliate advertising program designed to provide a means for sites to earn advertising fees by advertising and linking to amazon.com! So, basically, products linked on this site could earn some cash to keep this thing in business. 🙂

Medical Disclaimer: I am not a doctor, and this blog is not meant to diagnose, treat, cure, or prevent any disease or to be mistaken for medical advice. Please always consult with your physician before beginning any new diet or health regimen!

My Vegan Keto Cookbook
Is Here!!!

Save 20% at Lakanto With Code MeatFreeKeto!

Save 10% on Four Sigmatic With Code: HealthyLiz